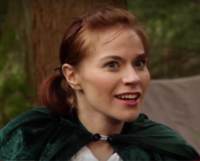 JQS1: Wren Birdsong has been following the party (Perf, Nara, Carrow, and Glorion) for a year after receiving her assignment from the Headmistress of the Bard's college. Wren notices Rilk and his comrade carve an orcsign and accidentally shouts "sod", which alerts the orcs and Nara. Wren hides behind the riddle pillar, barely out of view of the party. 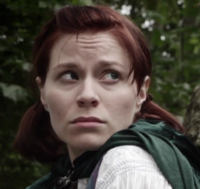