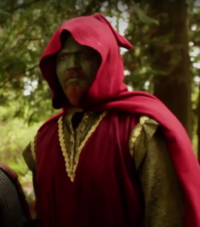 Yart FlaysChildren is the surviving caster of Sergeant Rilk's warparty and is good friends with Grellnock. When Rilk, Yart, and Grellnock are introducing themselves to Miss Bard (Wren), Yart admits a great secret.

"I have always longed to be a female." —Yart FlaysChildren

Immediately following, Yart says "Don't judge me." So, we're not going to! In this article, Yart will NOT be referred to by masculine pronouns.

After learning their story will be in the epic. Yart and Grellnock weave a tale of a awesome wizard's duel between Perf and Shaman Kurn, as well as an epic battle against fictitious murder elementals.

Yart, Grellnock, and Rilk are surprised by the appearance of Silver Tom, who immediately declares bardic immunity. Grellnock jumps in front of Yart protectively when Silver Tom tries to hand Yart an unknown potion. After Rilk takes the potion of tongues, both Yart and Grellnock are extremely amused to hear Rilk spout some human stereotypes in Westish. After Silver Tom threatens Miss Bard in broken Orcish, Rilk, Yart, and Grellnock set out to rescue her. Yart gives advice to Rilk about how to talk to a woman.

"Did you remember to give her your name?" --Yart FlaysChildren

In a truly spectacular show of ingenuity, Yart reverse-engineers a potion of tongues and disguise potions from some found humie magic. After testing on Grellnock, all three orcs take the potions and don the illusion of human-hood. Disguised, they walk into the dwarven mining village searching for the Orcslayer, Glorion. Yart and Grellnock veer off to go shopping and find Nara.

Yart looks good in human, too

Finished shopping, Yart and Grellnock wander through the town streets, still disguised, where they are stopped by Glorion and Roderick. Yart quickly discovers that Roderick is cursed to lie, and they use this to set up an ambush for Glorion, and the two go to find Rilk.

Yart and Grellnock find Rilk again in Daggie's Tavern, where they brush past Miad. Their Westish potions start to wear off as Glorion questions them again, and the three orcs retreat into a walk-in wardrobe area where the potions wear off. There, they find Silver Tom and Wren. After going through Silver Tom's bag, Yart and Grellnock fight over a magic compass and accidentally activate the recall spell.