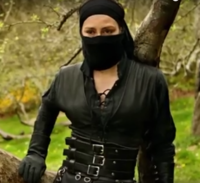 The Assassin first appears in JQS1E6 to interrogate Wren. After learning Wren is a bard, the Assassin chooses not to kill her. Later, the Assassin confronts the party (Perf, Carrow, and Nara) to capture them for a bounty from the Wicked Kings. To prevent escape attempts, the Assassin drugs Nara. Perf considers fighting, but runs instead, only to be recaptured by the Assassin again soon after.

The Assassin leads the captured party through Sumber, the city of the dead. Overrun with undead, the Assassin frees Carrow to turn the zombies, but Carrow is repelled by his own holy symbol and escapes. The Assassin, Perf, and Nara, enter a mausoleum and find a lone orc, Dr. Strong like Bull. A corpse worm attacks, and the Assassin "poofs" away. Later, she recaptures the entire party and Strong Like Bull, receives a message from the Wicked Kings via a elfmaid vessel, and kills the vessel at the Kings' instruction. She returns to the party, finds Perf freed, and uses magic to escape from Nara's blade leaving her clothes behind. The Assassin, naked, watches the party from afar, revealing that she is an elfmaid with a two-moon mark matching Nara's. Left with little other choice, the Assassin steals Wren's clothes.

"Your destiny is mine." --The Assassin to Nara

The Assassin had a rough time. She's probably fine though. 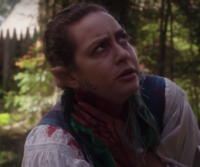 Anyone got a bandaid?