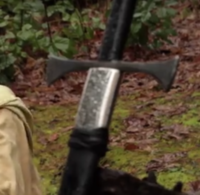 "I am your EVERYWHERE."

The Sword of Fighting is a blade capable of severing the most powerful magic.

In the Third Age

The surviving apprentices found the Sword of Sundering in the mountains around Sumbre. Spitting threats and babbling obscenities, the Sword sang its own prophecy to the assembled apprentices: whoever shall free him from his prison will lead a revolution and kill the Wicked Kings. The apprentices were unable to destroy the mad sword, infused as it was with such powerful energies, so they instead built a trap-laden temple around it and imprisoned the belligerent blade—which they renamed the Sword of Fighting—inside.

In the Fourth Age, the Sword of Fighting is a mythical sword that appears to be both sentient and homicidal. It can control the arm of its wielder, possibly even the entire body, and is able to make even Perf into an amazing fighter. Despite being intended to bring about a revolution and end the Wicked Kings, the Sword would rather kill things. The Sword is very derisive of Perf, and enjoys tormenting him with the fact that it will follow him everywhere.