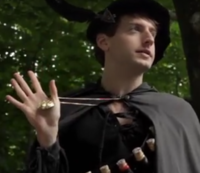 In JQS2, the dream bells ring, and the headmistress summons Silver Tom to her office to inform him of the confirmed sword quest. He is transported by the Djinn to the side of Grellnock, Yart, and Rilk in his search for Wren. Silver Tom finds Wren in the city of Sumber, where he also sees The Pale Lady, before he follows Wren into the mausoleum. He soon steals her badge and confiscates her notes as she saves Rilk form a corpse worm. He proceeds to follow the party (Perf, Carrow, Nara, and Glorion) from afar to continue the epic.

I guess I'll write a tragedy?

In JQS3, Silver Tom continues his epic. Due to his fame, he is recognized by Perf and others in Daggie's tavern. He squabbles with Wren about her continuing with a rogue epic and soon hides from Glorion in a closet. Yart and Grellnock accidentally activate Silver Tom's recall spell and "poof" away, leaving him stuck with Rilk and Wren. Soon, Glorion finds Silver Tom and captures him to force him to chronicle his epic, effectively breaking the grand tenets.