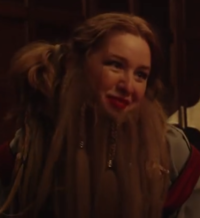 "Dibs!"
In JQS3, Daggie is a Dwarfmaid who owns a tavern-theater in a dwarven mining village in the Afterlands. She has a lovely beard, which looks as soft as a very soft thing.

Daggie takes care of Wren after Wren has a potion mishap and hallucinates at the beginning of JQ Season 3. Daggie is seen bartending, when Perf arrives in the tavern. Daggie calls dibs on Perf to her friend and employee, Miad, and proceeds to aggressively flirt with Perf.

After some semi-nude rib-counting, Perf tells Daggie about his crush on Nara. Daggie mostly steps aside, but has a diss-battle with Nara, who has come to collect Perf. This ends in some punching. 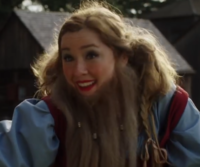 "The first step is admitting it!"
Daggie and Miad face off against an assassin who has threatened Nara. Daggie wields a wide-nozzle firearm (check name), and once the assassin is dispatched, gives Perf and that elf chick some foodstuff.
Retrieved from "http://wiki.zombieorpheus.com/index.php?title=Daggie&oldid=3172"