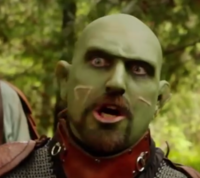 Grellnock is a surviving orc warrior in Rilk's reduced warparty, along with their caster Yart.

He meets Wren and tries to make himself and his party's shaman Kurn look cooler by lying about murder elementals. This is ineffective. 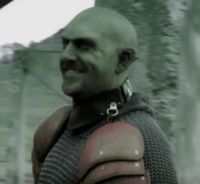 When Silver Tom tries to hand Yart an unknown potion, Grellnock jumps in protectively. He is protective of Yart and generally good natured.

As the orcs follow Wren to Sumber, Grellnock excited to increase his ear collection. When Rilk starts to battle the corpse worm, Grellnock and Yart rush to Rilk's aid. 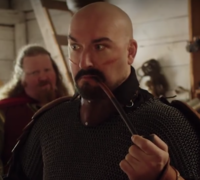 Grellnock serves as a guinea pig for Yart's magic disguise experiments, retching several times. After helping Yart to lay a trap for the orcslayer Glorion, he and Yart find Rilk in Daggie's tavern. They accost Silver Tom, find a magic compass and accidentally activate the transport spell.

Translation notes: Although there is no letter "c" in orcish, except in the "ch" sound, the subtitles of JQS1 say Grellnock, although it is more likely spelled "Grellnok."

Grellnock SkullSplitter tells Wren that his name is spelled with two "L"s, rather than the five we see in english. However, once translated into orcish, the only Ls are in his first name.