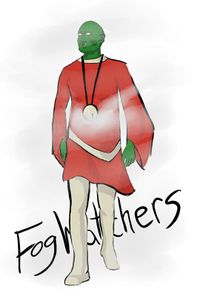 Great. Another one of the fog's babysitters has gotten possessed.

A clan of mystics bearing messages to orcdom from a source otherworldly and unknown.

The Fogwatchers are a religious order who watches the thick, deadly fog on the north coast of the Fallen Isle. There is no formal leadership, and when decisions have to be made, they consult the Fogwatcher's Account.

Those who enter the fog must first undergo ritual purification. Those who enter and are chosen remain in the fog for months or years, return with a message, and die shortly afterward. This message may be for any person, Fogwatcher or otherwise. When delivering their message, the chosen are trailed by a train of fog. These messengers are holy to every clan, and all clans will make way. Those who are enter and are not chosen become monks at one of the clan's temples.

The Fallen Isle (a massive landmass off the northwest coast of the Afterlands) is said to be the home to the Ord during the Age of Wonder. After the ord left, they dropped the island. The north coast of the Fallen Isle is blanketed by miles-thick fog.

The Fogwatcher's Account is the text brought back by a Laughing Bear cleric who entered the fog. She was the first to return. After delivering her ominous message, "The Fog must be watched," she died.

Note: The Black Spears have canceled invasion orders three times after messages from the Fog.