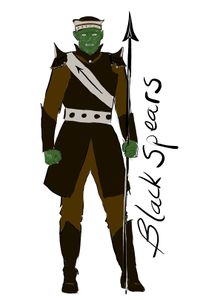 The Black Spears are a huge clan, possibly numbering over a million. All members train for war as part of their upbringing.

Black Spears believe in Orcish Supremacy, and subscribe that their destiny is to conquer the world and enthrall most other races. (Dwarves will not be enthralled, but eradicated.) Black Spears are hostile to all other non-orcs.