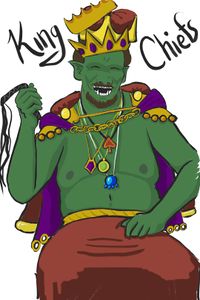 A feudal clan of knights and lords ruling over a captive human population.

After destroying the armies of the human states in the Southern Afterlands, the King-Chiefs put the human serfs to work rebuilding castles and arsenals. When the displaced kings returned during the Boreal Crusades, the King-Chiefs repelled them and declared themselves the new kings.

(The humans are slaves to the King-Chiefs.)

Orc Knights are the most fearsome of the King-Chief warriors, and possibly the strongest heavy cavalry in the world. Humans can serve as archers and pikemen.

Other clans often consider their adoption of human customs as "unorcish," and modernists hate their use of slavery.

Note: In Year One Episode Two, the party (Perf, Nara, Carrow, and Glorion) interact with King-Chiefs trading with the Mancutters.