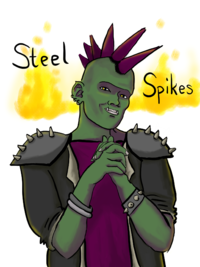 We prefer to think of ourselves as "trouble-farmers."
Tinkerers, tricksters, and troublemakers, the Steel Spikes are the bad influence Orcish parents warn their children about.

After breaking away from the Black Spears a century ago, the Spikes are interested in the relics and ruins of the Afterlands, particularly the dwarves and their firearms.

Steel Spikes are ruled by a chief who must be both strong and wise. If the chief is not wise enough to sniff out unrest or usurper plots, then that chief is not fit to rule. Steel Spike youth are prone to death by dare in games of "weakling," in which a young orc will be dared to do something dangerous or deadly.

The Steel Spikes are slavers of gadzork, preferring dwarves.