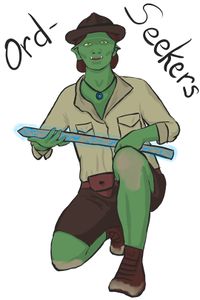 It's an Orchaeologist!
A clan of archaeologists obsessed with cracking the secrets of their long-lost ancestors.

The Ord-seekers live in the north of the Afterlands, in mountains where battles between the Ord and the Ald took place during the Age of Legends. There, they search for ordic relics, like the ship that stopped their far-run in the Red Exodus.

Their central settlement is called The Archive (Kurtam) and lies near granite mountains. The Ord-Seekers store their research and artifacts in protective rooms carved from solid rock.

Magic is considered a lesser calling than a Researcher.