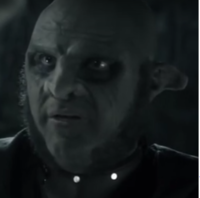 Strong Like Bull is an Westish-Speaking orc with a doctorate and a member of the Turtle River Sect of the Laughing Bear clan.

He is in Sumber studying Arcane Archeology and Deific Mortalism, and recognizes the Sword of Fighting after leading the Assassin, Perf, and Nara into an ambush with a corpse worm. Strong like Bull is the first to identify Perf's dyslexia and capabilities as a retromancer. After striking a quick friendship, Strong like Bull leads Perf and Nara out of the mausoleum and they are recaptured by the Assassin. Strong like Bull acknowledges Carrow as a death priest and encourages him to imbue an object with shadow to defeat the nimbus of Vieris' angel. Strong Like Bull leaves after the Assassin is defeated.