Episode Sixty-Six: The Good, The Bad, The Worst 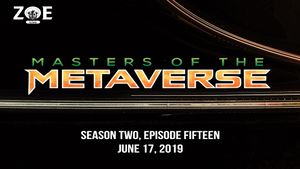 Wyatt, Maddox, Crash, and Rosie are sent into the Weird West where they must fight forces divine and arcane to save Joe's Diner.

Colonel Jaxun, joined by his friend Jebediah and the mostly machine man that was John Stone, sends Crash, Rosie, Maddox, and Wyatt back into the Metaverse of the Weird West. Once there, they find that Doc and Jesse have become servants of the devil, collecting souls and bringing them to purgatory. Gatling and Annie Oakley are tasked with stopping them, something that becomes a bit simpler when the pilots take a bit more control. They agree to let the certain soul they are after go, for now, and Doc opens a portal to Purgatory as Crash is able to sense that Joe's Diner is thousands of miles away on the continent of South America. Traveling through the underworld, Gatling and Oakley are attacked by the demons who hunger for their living flesh. The group fends them off as best as they can until a ghost train arrives and carries them to their destination. As they go, the group meets the devil himself, who reminds Doc and Jesse that they owe him a soul...and Gatling and Oakley are not on the list. Instead of adding an extra 100 years to their sentence, Doc goes back and retrieves the soul they initially let go and the group carries on. Upon reaching the portal to South America, they are confronted by a giant Vulture like creature who guards the door. He refuses to let them pass until Gatling sells him some of his miracle skin cream.

Arriving in South America, the group notices a distinct lack of wildlife. Gatling, using his newly acquired druidic talents (thanks to Johnny Appleseed), senses that there is a great area of darkness and death which also centers around the place where Joe's Diner is supposed to be. Making their way ahead, the group is confronted by a swarm of man bats. While Jesse James seems to have better things to do, the others dispatch them efficiently. Bedding down for the night, Rosie uses her powers from Hex to lift the devil's curse and allow Jesse and Doc to eat and drink for one night. In the morning, they continue on their way and soon find the Joe's Diner. It is surrounded by black stones and an arcane energy. Doc and Jesse are suddenly gripped by dark tendrils which are coming from two groups of necromancers nearby. Gatling and Annie disrupt the spells and prevent their comrades from becoming dark puppets. A stitched together demon appears and, along with the remaining necromancers, makes a final attempt to stop the pilots. They are unsuccessful and Annie Oakley carves her name into the side of the building, preventing TOM from using it in his plans. Back in their home Metaverse, the pilots are told by Colonel Jaxun that they will be sent on two simultaneous missions, Thomas, Jenika, Aquamarine, and Crash are being sent back to the 80s world which is now under alien occupation. Wyatt, Maddox, Brony, and Andi are being sent to a new world, one that is medieval in nature but there is something off about it...but the Colonel is not able to put his finger on what.