Difference between revisions of "Blueskins" 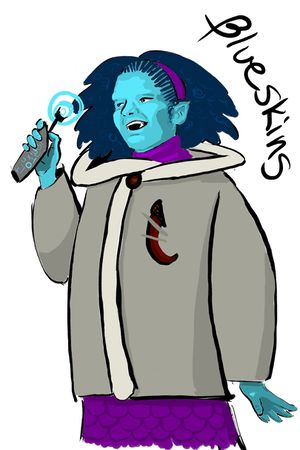 I hope that thing has a safety switch

The Blueskins long to return to the glory days of the Ord, rediscover the secrets of technomancy, and perhaps, one day, rejoin their ancestors among the stars.

During the Red Exodus, the ancestors of the Blueskins travelled as far northwest as they could possibly go and settled there. Over several generations, they have become more ordic. Their lifespans increased, their need to hibernate shortened from 2 months to 2-3 weeks, and the chlorophyll in their skin thinned until many are blue or teal.

The Blueskins are ruled by a council of eight: four orcs and four orcmaids. Those on the council are usually the most blue-skinned. Despite the general distaste for blue-skinned orcs (see the Astral Voyagers), Blueskins are appreciated among other clans and hired as denwatchers.

Some Blueskins have rudimentary technomancy abilities.