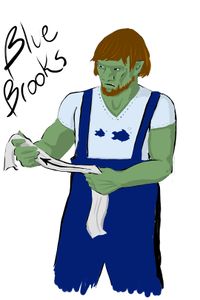 Dwelling on the border between orcish and human lands, this clan of scouts and trackers was recently absorbed by the Black Spears.

During the Red Exodus, the Blue Brooks hid rather than fight with their orcish brethren. They retreated west and south until they settled between the Afterlands and the Golden Plains, at the headwaters of a blue brook.

When the Wicked Armies marched through these hills (e.g. Boreal Crusades), the Blue Brooks fought when necessary, and reported key information to the larger clans. They are nomadic by necessity.

Wedged between the Wicked Army and the Black Spears, the Blue Brook's area (the brook and foothills) are now a no-man's land and "lawless multicultural trade hub."