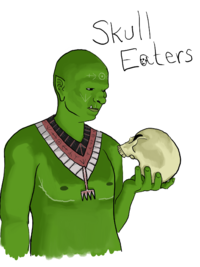 It does look pretty delicious though.
Practitioners of funerary rituals, the Skull Eaters guide the slain to their rewards in the afterlife.

Tul Malifox (The Dead City) lies in the center of the Skull Eater clan's desolate region of the Afterlands. The Dead City houses women and children, as well as returned Skull Eater monks. Monks travel throughout orcdom, performing rituals to allow souls (orcs and gadzork alike) into the next realm. Most orcish clans regard Skull Eater monks high regard but uneasily, given the false rumors of these monks cannibalizing the dead.

All clans require a Skull Eater monk to attend to the dead within one lunar cycle, making these monks an important part of any settlement, army, or other large group of orcs.

Skull Eaters also attend to the dead of non-orcs, but the heads of gadzork are removed as part of the process.