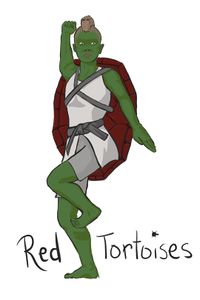 Someone's been watching teenage mutant ninja turtles.
A clan of former slaves that freed itself from the King-Chiefs, the Red Tortoises pursue physical perfection atop their mountain plateau.

The ancestors of the Red Tortoises were enslaved by the King-Chiefs for refusing to bend a knee, and forced to farm and raise tortoises for food. The Red Tortoises rebelled during a raid, used farm implements to kill their overseers, and escaped with their tortoise carts and makeshift weapons into the mountains. They're named for their blood-spattered tortoise shell armor.

The Red Tortoises believe in the balance of all thing, and are effective fighters both armed and unarmed. They use as basic tools as necessary, and are uninterested in conquest. They will teach both ork and gadzork who prove their dedication, but are uninterested in visitors.