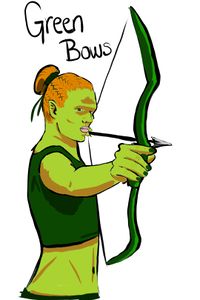 The youngest of the Orcish clans, the mercenary Greenbows have laid the foundation of their future in blood and gold.

Only thirty years ago, a ragtag group of orcs appeared in the Afterland wilds. After being rejected as foreign by other orcish clans for trade, they worked as mercenaries and adventurers before settling in a cleft of a small mountain and declaring clanhood.

Their use of gem-adjectives ties them to the Austral orcish clans, mostly unknown groups from the southern continent. Foreign ways might explain their addition of non-orcs in the clan, though orcish remains the common tongue.