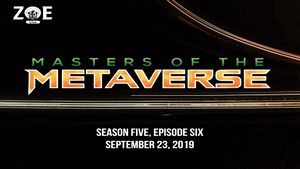 Andi, Bruno, Thomas, Aqua, and Jenika enter a new world full of TOMs. How far will they go to capture him?

The pilots are awaiting their next instructions from Rhodes when they hear a knock on the door. A mailman delivers letters to each of them and disappears. They turn out to be letters from someone named Monday/Milkshake, offer words of reassurance and hope. Zenda relays his newest instructions from Rhodes and they head into the Metaverse, still processing what their newly received messages mean. The pilots leap into a world of magic and technology and are met by Rhodes. It seems in this world of facist magicians, TOM has somehow found a way to take over an order of monks. He now populates an entire planet, one that the pilots must destroy which means they have to steal a warship. Rhodes departs and the others quickly realize that Bruno's avatar is not so fond of pretty much any one else on board. Bruno tries to stay in control as Andi leans into her avatar. Thomas uses his Presto ability and summons a fully armed warship to their exact location. This is less than ideal but a plan is quickly formed. Bruno keeps his avatar under control and pretends to be captured while Andi and her avatar schmooze the soldiers on the newly summoned ship. Once they confirm the identity of the newly captured prisoner, the warship's crew transports the pilots over to their ship. They immediately try to subdue Bruno's avatar which goes...not well. The alarm systems are eventually shut down and the bridge party either subdued or murdered. The pilots vent off the life support at Thomas' suggestion in an attempt to make sure that no one else comes after them. They then travel to the newly sealed off bridge and Aquamarine charms them into opening the door. Once on board, and the bridge crew appropriately intimidated, Andi attempts to channel her avatar and fly the warship. With Aquamarine's help she manages to do so and eventually they are outside the planet of TOMs. Unfortunately, the only person who is able to fire the giant weapon needed to blow up TOM World is Bruno's avatar...who wants to kill everyone else on the ship, including the avatars. Thomas and Bruno remain on the bridge with Jenika while Andi and Aquamarine head outside. Bruno lets his avatar loose...and he promptly orders Jenika to subdue Thomas. She refuses and Thomas is struck by and electrical blast of elemental magic. Thomas moves Bruno back into the driver's seat and instructs him to fire the weapon. After a misfire, Bruno finally gets the shot off and destroys the planet of TOMs. Thomas collars Bruno's avatar, preventing him from doing magic after Bruno is gone, and they shut down Jenika's avatar/evil sarcastic android. They white light surrounds them and they open their eyes, back in their metapods.