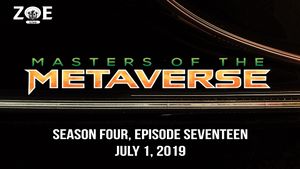 The pilots once again travel to the world of the Borks. Things are much changed and the team must engage in a fight for their lives...and their souls.

Maddox, Wyatt, Andi, and Brony are sent back to where it all began...the land of the Borks. It seems in the time since they were last there, the fallen Knights of Borkdom have taken to murdering humans. It started off as an attempt to destroy all wizards in an attempt to find those who had taken over their minds and caused them to do the terrible things to their friends...but now it's pretty much just about the murder. The four borks have brought a reign of terror down on the humans and are stalking more prey, when they suddenly notice that each of them seems to have a floating human ghost just above them. The pilots manage to get back some control before the borks start killing each other and are horrified at what has happened to this once innocent world. Just then they smell pastries and hear singing. A strange man with a cart approaches the village and strikes a deal with the mayor. He will rid them of this scourge so long as he gets the bork jelly. He is, after all, The Bork Hunter. The borks sneak out of town and soon find themselves surrounded by the most delicious smells. The bakeries are working again and if there is one thing a bork cannot resist, even a murder hobo bork, its pie. The four steal into a bakery and begin gorging themselves...which explains why they do not hear the humans surrounding the building. Using some flour and flame, they rocket themselves out of the chimney and right next to the Bork Hunter's cart. Hanging in a cage on the back of the cart, beard shaven, is none other than the littlest bork. The Bork Hunter sets his trap and manages to capture Bowie. The others rally and devise an attack. Freeing Bowie, they all strike and brutally murder The Bork Hunter and a few collateral humans. The littlest bork is horrified and runs off again. The humans now also know the weaknesses of the borks which probably won't have any consequences...probably. Andi suddenly senses a nearby Joe's and the four pilots make their way there. After marking the outside to prevent TOM from using it for his plans, they enter and are soon greeted by Rhodes. He's tired and has a warning for them all. Stay out of the bork world and cease all Metaverse travel within three days. He is aware of TOM and tells the pilots that he is rooting for them, which is why he's letting them have three extra days. With this new warning and information, the pilots are once again surrounded by the while light of the Metaverse and returned to their own world.