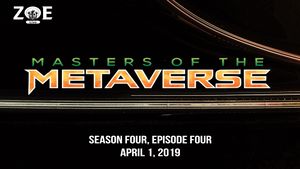 The Metapocalypse has begun. Jenika, Wyatt, and Aquamarine find themselves in a new Metaverse, on the hunt for a mysterious artifact that TOM needs them to find.

Wyatt, Jenika, and Aquamarine find themselves washed up on a desert island, in a Metaverse that they have never been to before. Also concerning, Maddox is not with them. Wyatt has some uncomfortable moments with the two remaining pilots, as he explains just what he and the other Project: Metaverse pilots have been up to during their time in the Metaverse. Thankfully, TOM interrupts this interrogation with some distressing news. Not only are the pilots not in the world that he intended them to end up in, but he is not entirely sure where Maddox is. She is somewhere in the current Metaverse, he just needs to find her. While he hunts for Maddox, TOM instructs the others to search for an artifact that is somewhere on this island. Once the artifact is found and studied, Jenika, Aquamarine, and Rosie will be able to reconstruct it back in the home Metaverse. TOM disappears and the pilots suddenly find themselves confronted by a swarm of giant crabs. Wyatt and Aquamarine lean into their avatars to help, while Jenika swarm forms and explodes one from the inside out. Once the crabs are dealt with, the group heads inland...only to be surrounded a group of less than friendly natives. While Jenika wants to play goddess, the others convince her that running is the better option. As they flee, Jenika notices that all the tribesman avoid the water at all costs. A quick experiment reveals that it is likely flesh eating...or at least shoe eating. Finding a hiding place, the pilots are met again by TOM who directs them toward a plateau which is near where the artifact can be found. As they travel, Wyatt encounters a giant frog...from the inside. Once they extract the butler, aka Wyatt's avatar, they find themselves in a strange place. Ahead of them is a wrecked Spanish galleon, one that appears to have been dropped from the sky. Exhausted from a days worth of peril, the group takes their rest. They are awakened in the morning by the sound of dinosaurs grazing nearby. After watching a baby dinosaur learn the hard way that Mother Nature isn't always kind, the pilots reorient themselves and try to head off again in search of the artifact. And then it starts to snow. And snow. Per TOM, the Metaverse is here and currently freezing the river solid. Traveling along, the blizzard eventually slowing, the group discovers Amelia Earhart's plane. And another dinosaur. The pilots flee, quickly, until they run into the horse sized ants. Flame throwers and ant seduction happen. Yes, really. Aquamarine helps her companions ride on her new ant friend, and the pilots head off in what they assume is the right direction. After a time, something moves in the bush around them. A second group of natives appears, much smaller and nicer than the first, who escort the pilots to their village. And there, in the center, is Maddox and her avatar...