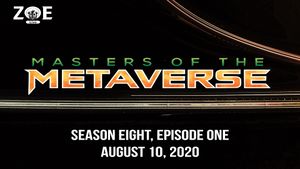 It's been three years...what has happened since Crash and the others disappeared?

In the three years since Crash and the others have disappeared, the remaining members of the team have been looking for them. Mac even experienced his first avatar, the brother of Dr Migraine in 668, but no trace of the missing pilots can be found. Nick and Tessa have vanished while Brony has retreated to a monastery. The rest of the team have been trying to keep the world in line...and today it's transporting a rogue MetaPilot. Mac senses people approaching just in time for their vehicle to get slammed. Mac and John are in the jet above and see the tactical team swarm the vehicle. Bruno moves the prisoner off to the side while Rosie turns them invisible. The truck is breached and Rosie and Bruno need to contend with tear gas and flash bangs. Meanwhile, John Stone jumps out of the jet and forces the surface to air missile out of the way. Mac goes to get everyone guns while Bruno feels the burn with the tear gas. Rosie uses her magic to turn the enemy weapons into sunflowers before she moves the tear gas out of the way. John rips up a piece of the asphalt and wings it at their attackers. Mac arrives with the guns and Rosie uses a haiku messes with the minds of the tactical team. John Stone attempts to intimidate their attackers while Mac actually shoots someone. Then the trucks blow up. The explosion takes out not only the tactical team, but also the prisoner that was being transported. Rosie heals the two remaining survivors and then attempts to read their minds. It seems that these men were sent by The Program, which they believe still exists as an entity. John Stone goes through their phones and finds that the calls from the higher ups are coming from nowhere...much like the calls that had come from TOM. The FBI steps in to go over the scene and the pilots head off. John Stone does some more research and confirms that the team that attacked them all believed that they were working for The Program. Also, the explosives were hidden and remotely detonated. There is a sudden call on Bruno's phone. There is an urgent matter that needs tending to in Langley. Namely a hostage situation. No one knows why these people are being held. As they approach the area, the pilots overhear military code. Rosie decides to take Mac's brain for a ride. Mac then beams Rosie into one of the people inside the house. Rosie and Mac both see the people inside, all in tactical gear. There is also one blonde man standing in the middle of everything, no guns or armor, holding a radio. Only closer inspection, the armor appears to have pieces of 742 stolen armor pieces worked into it. They are also carrying 742 plasma rifles. Rosie also senses that someone, who is not physically present, is using magic to watch the grounds. Bruno, Mac, and John head off toward the guest house, where one group of hostages is being held. Rosie makes a bubble, halting any sound from getting out, while John jams the radios. Bruno disables the mines on the door and rolls in as Rosie and John take out two of the wandering guards. John stabilizes the injured hostage and then they move off to secure the second group of hostages. They take out the second group of hostiles on the upper floor and head off to deal with the group on the lower level. Bruno disables the alarm and John realizes that someone has noted that he has done that. Mac feels someone on the guards side of things get excited about that. Rosie teleports Bruno and John inside. Mac suddenly senses a lot more people appear as if from thin air. And then the bottom floor of the house explodes. The hostages are now dead. It looked like the blonde haired man himself actually blew up. As Rosie lifts Bruno and John out of the rubble, someone rips open the door to the jet. Mac makes a run for it while John tries to stabilize the only two remaining hostages. The blonde man reforms, now naked, and stands in front of them. Bruno tackles him and chokes him out. Meanwhile someone tries to hex Rosie...so she bum rushes him. Mac keeps running as John Stone subdues the last hostiles. Pierce then radios in that there is an alarm in Archangel base...someone is inside.