Episode One Hundred And Eight: May Dreams Never Die 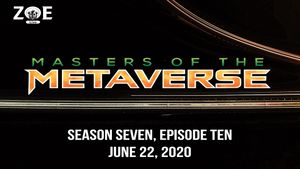 Brony, Crash, Rosie, and John head to a different version of the Weird West they know. Once there, they set about building the legend of Butch Cassidy.

The spirit of the Weird West is dying but there is a chance for it to be kept alive by four heroes...who have all just received an invitiaton from Mark Twain. He still believes in things bigger than industry...like stories. He wants the group to help him with on Butch Cassidy and his legend. He wants to start a revolution of thought. And only the last of the legends can help. The group sets out for Salt Lake City and crash lands in the middle of things. They head for the bank, which is still recovering from having just been robbed by Butch Cassidy. Rosie notices that there appears to have been a shoot out outside the bank. Heading inside, they discover that there is a posse on the trail of Butch Cassidy and his gang. Apparently the lawmen have a lead, a local lady who has had relations with the gang. When they arrive, they find the residents being threatened by industrialists. With the help of golfing, hammers, a horseless carriage, and a flying animated sword, the pilots handle the would be assailants. The ladies are grateful and invite the pilots inside for some coffee and to talk about Butch Cassidy. The Bassett sisters tell them to head to a maze of canyons called Robber's Roost. They also tell them that Butch is trying to help legends grow, which is why he took the money in the first place. Before setting out, Brony gets a steam mech to ride in and John Stone makes himself a suit of armor. Reaching the canyon, the group follows some horse tracks to a trail. They meet two of Butch's gang who then take them the rest of the way into the canyon. Coming to Butch Cassidy, the pilots explain Twain's mission and offer to help grow the legend of Butch Cassidy. They offer to help him and to join his gang. Butch agrees and lets them in on a new plan. They're going to rob a train. Crash and Brony suggest actually stealing the train instead. The plan is to build new tracks and divert a train after they're built. But first they have to rob a train yard to get the raw materials for construction. Crash persuades the local populace to help them gather the materials and they set to work. The track completed, the group returns to Butch Cassidy. He's found a train worth robbing. This one contains tons of Edison's gold from California. The only problem is that the train will be heavily guarded. At dawn the next day, the train heads out from Salt Lake City and the pilots move to intercept it. Boarding the train, Crash and Rosie head toward the engine while John and Brony go for the caboose. Brony meditates on the roof of the caboose and six golems pile in and fall on their backsides in an attempt to shoot him. Which they don't. In the engine car, Rosie disables the steam powered engineer. Crash, posing as Butch Cassidy, rides a lightning bolt and throws the switch, sending the train down the tracks that lead back to Butch Cassidy's camp. John pitches the golems out of the back of the train while Brony uncouples the caboose. The train steams off via the new tracks as Crash resets the switch, hiding their path.