Episode One Hundred And Six: A Grim Fairy Tale

The pilots return to a world they once knew...but things have gone a little borking wrong. 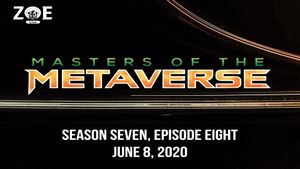 Wyatt, Andi, Crash, and John are sent to the world of the Borks. The borks have been rounded up and captured by The Bork Hunter and his mindless sentinels. The Bork Hunter then turned on the humans and used the bork magic to power his army. But a Bork rebellion is rising...luckily they seem to hear narration. Crash's avatar has been preparing. He's made a bork suit of armor. And he wants to reform the Knights Of Borkdom. However, there is only one suit of armor. Crash puts it on. In an effort to get where they want to go quickly, Crash sets about making a mechanical sled while Wyatt's avatar steals stuff. The group sets off into what is left of the magical woods. Thanks to their pogo stick transport, the group can see that the trees are being burned in giant factories downstream. Unfortunately the group chooses this moment to run into a group of silent sentinels, who are out hunting for borks. Wyatt stealths into the grass while Crash reprograms one to only love. The other sentinels use giant forks to try and capture the borks. John uses his static charge to break one into pieces while Andi throws her shield at another sentinel's head. Wyatt kneecaps one attacker and then scuttles off into the underbrush. Crash takes a running bounce at the kneecapped one and pushes him into his friends. And then shocks them which causes them to explode. The one programmed for love hugs another one to death. John initiates a Fast Bork Special and bounces off Andi to knock the attacker off of Crash. Andi, for her part, inspires the humans to not flee in terror and perhaps maybe join the fight? They set up a defensive line while Wyatt kneecaps another automaton. Crash electrocutes himself and then does a running super punch on one of the remaining enemies. After the fight is over, the group checks on the humans and finds that they are all children. Their parents are being forced to work in the factories. The children are scared of them at first, they've heard tales of borks killing humans, but Wyatt manages to convince them that not all borks are evil. They help the children hide someplace safe and then head off to the villages and the factories. Crash builds a bork boat and the group finds their way to the village. The only thing left in good repair is a giant factory. They decide to pretend to be a human. After some soft bouncing. In their human disguise, the group pretends to head to work in the factory. Inside it appears that the factories are building more automatons. But they're currently powered off. Doing their best to pretend to be a human, which is not very good, John attempts to speed up the conveyer belt while Wyatt steals crucial parts from the automatons. Meanwhile Andi jumps onto the conveyor belt and spreads love and friendship to all the humans while Crash builds an army of perfect friend automatons aka Chad. Unfortunately this triggers the guards to attack. Because you know...smiling and love are forbidden. A combination of love, friendship, the power of Chad, and a fast bork special takes care of the attackers. John attempts to hack into the final remaining guard and discovers the location of the castle, which is also the source of power and control over all the automatons. He also realizes that the automaton is powered by bork magic. And, according to the narrator, the borks have enemies incoming...