Episode One Hundred And Two: Shattered 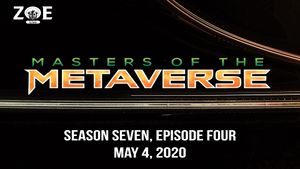 After learning what happened to Crash and the others, Andi, Thomas, and Aquamarine head into the world of the Feathered King in an attempt to uncover the source of the infection seen in the previous Metaverse.

After learning what happened to Crash and the others, Andi, Thomas, and Aquamarine head into the world of the Feathered King in an attempt to uncover the source of the infection seen in the previous Metaverse. Fleeing from the destruction of the nearby cities, the pilots find themselves, and their avatars, under attack. Thomas and Aquamarine set about trying to repair the ship's cloaking device while Andi engages evasive maneuvers against the bounty hunters. One of the ships can't survive the egg roll maneuver but one can, and sends in a boarding crew. Andi's avatar initiates another insane move with the ship. Many of the boarders fall off...but not Hawk and Stormcrow, the deadly bounty hunters. Aqua starts inflicting heavy damage while Thomas gets the cloaking device online. As Aquamarine takes on Hawk, Thomas intervenes with an ancient and elegant weapon of a bygone age. A skyblade. Andi then throws what remains of Hawk out of an airlock. Thomas and Aqua head over to the bounty hunter's ship in an effort to find some parts to repair their own craft. Once the ship is no longer in danger of falling out of the sky, the group hashes out what comes next. The Feathered King has gone mad and needs to be stopped...but who is able to do such a thing? It seems that the Feathered King unleashed a terrible weapon, a Great Storm, on his own people and no one is certain how to stop it. There is some concern about the possibility of this being a piece of TOM. However, Thomas does a quick scan and comes to the conclusion that TOM is not involved in this at all. They finally convince Andi's avatar to take them to a small planet on the outskirts of the clouds. They do so and seek out Oldie Swan. They've been expected...of course. They talk, they eat questionable cookies, and they have a training montage. Leaving their strange mentor behind, the group approaches the Great Storm. Flying into the storm, and executing some very fancy maneuvers, the team reaches the eye of the story and the citadel within. The guard towers open fire, destroying one of the ship's engines. Coming to a crash landing, the pilots find themselves facing down spears with legs attached. Eggs with legs and guns. The team opens fire and begins cutting through the...shells? Making their way to the Citadel, they find their way into an underground passage. Andi obtains the uniform of one of the enemy soldiers and manages to power down the defenses of the central citadel. Making their way inside, the group runs into a squad of guards. These guards appear to be taken with the same madness that has afflicted the king. Using the powers of feet shooting, hulk smashing, and cars two and three, the pilots dispatch them and press on, joined by the ghost like form of Oldie Swan. Finally reaching the Sky King, they find him much changed. He demands fealty of his son which is refused...so combat begins. Andi realizes that the Sky King is actually a metapilot, with a bonded avatar. It seems that the Sky King went mad after visiting the "seeing stones". Aquamarine senses a struggle inside the king. He does not wish to fight but something inside of him is forcing him to do so, something that feeds on fear. Thomas races toward the Sky King and, thanks to Presto, pulls a pair of Meta End handcuffs from nowhere. The bond to his avatar is severed, his connection to the Metaverse is cut off. The king appears close to death but his mind is cleared. He tells the pilots that the creature who threatens them is a being that hates hope and feeds on fear. The creature wants only the darkness. Andi uses her power and rips the king free from the terrible creature that held him. The pilots return to the world to end the storm...and to return hope to the people who live there.