Episode One Hundred And One: Blackout 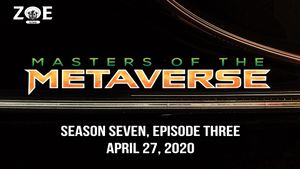 The pilots uncover the infection on the Metaverse and it comes at a cost no one expected.