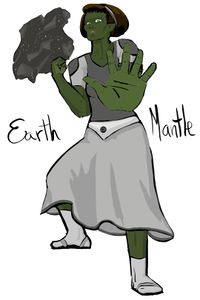 Don't ask an Earthmantle if she has a pet rock.
No other clan terrifies the dwarves as much as the Earthmantle, for no other clan can strike them in their homes.

In order to hasten their expansions after the age of legends, dwarven geomancers identified orcs with talent and bred them to create the ancestors of the Earthmantle. When the orcs rebelled during the Red Exodus, the Underkings sent an army do kill all the Earthmantle orcs, who they feared above all others. The Earthmantle escaped North and up, collapsing tunnels, until they broke through the roof of the Blue Mountain. In a stroke of revenge, the surviving Earthmantle brought down an entire mountain, irrevocably crushing the Dwarven city of Copperdeep.

"The sky is mine!" --Earthmantle warcry

Dwarves kill all Earthmantle on sight, and have even hired other (unscrupulous) orcs to attempt Earthmantle slaughter, so Earthmantle members are extremely wary of any outsiders, orc or not. They live in rocky foothills as farmers and geomancers, in seamless fortresses, and many are afflicted with claustrophobia from generations of being "mantled in earth."