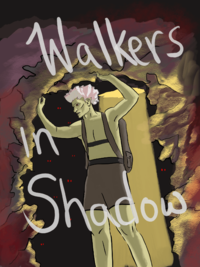 He's probably looking for the rest of his clothing.

The only true subterranean orcs, the Walkers in Shadow trek through the dark places of the world, searching for a truth only they understand.

Descended from orcs sent by dwarves to explore subterranean dangers, the Walkers in Shadow live their lives underground. They have keen eyesight, and yet still believe sight is a far overused sense. Kitasi, also known as the Penumbral Poet, lived in the time of the Red Exodus and wrote a famed tale containing a hundred different words for "dark." Many orcs believe Kitasi is still alive, or has been reincarnated in each generation.

The Walkers in Shadow search for truth in the subterranean caverns, and believe that mystic answers and the footprints of their god can only be found in places where no sentient being has stepped.

The Walkers in Shadow provide information on dwarf movement to the surface-dwelling orcs. The Black Spears and other militant clans use this to dissuade dwarf armies from moving toward the surface. For this "Dwarf Watch" service, the surface clans often provide food and other resources to the Walkers in Shadow, allowing this clan to remain where they like to be: Underground.