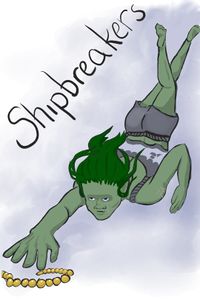 Right after this, she's going manta surfing on the ocean floor.

Any captain sailing for Orksport knows about the Shipbreakers: ambush predators luring merchantmen to their doom on the rocks.

These coastal orcs lived as divers, fisherman, and scavengers on the Afterlands coast near Orksport, learning to hold their breath for long periods, before learning that ship breaking could be a lucrative pastime. Their ability to dive far and long makes them excellent shipwreck scavengers. The Shipbreakers attack ships and steer them to the shallows or scuttle them. After merchants learned to avoid their coast, they employed their shamans to kill the wind to the advantage of their warriors.

The Shipbreakers are matriarchal, and their elder council is called the Sirens.

Since they attack trade to Orksport, the Red Heels hate them. Other orcish clans don't care much, though.