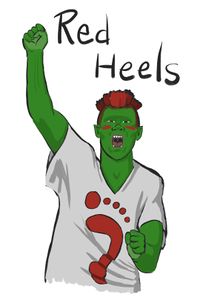 Considered the most civilized of the orcs by the multicultural south, the Red Heels struggle to maintain their place in orcdom.

They are ruled by a council with complicated rules and representation for minorities, including gadzork. See the OED2 for more information. (This bard is tired and doesn't understand politics. --ARG)

Red Heels have the longest life expectancy of any tribes, averaging forty years.