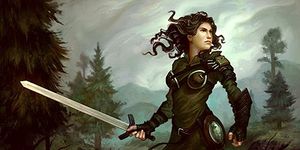 Myriad Buxtehude is a hero and questor of Holden and wife of Prince Rannon of Malchior. During the most recent war, she was instrumental in preventing the rise of the Dread Army to the God Head Seat. She has been traversing the realms in the Tapestry of Worlds in search of an Apple of Life since the end of the war.

Having driven back the Ixhasan horde repeatedly with the aid of her lover Tuatha Dundareel, Buxtehude was Holden's shining hope in the war for the God Head Seat. Using lost tactics and weapons left by her father Simm Buxtehude, the tiny kingdom of Holden stood its ground. Holden's success was not without cost. In a skirmish against Ixshasa, undead assassins ambushed Myriad and Dundareel, killing the Seelie prince.[1]

Heartbroken and believing Holden was fated to be destroyed, Buxtehude abandoned her post and sought answers from the Oracle of Pale Mountain. Heartened by the Oracle's wisdom, she returned to find the soldiers of Malchior had stormed her army's lines. The Kingdom of Holden faced certain defeat at the hands of General Hain of Malchior.[2]

Upon taking the Castle of Holden, General Hain made a momentous decision. In exchange for Myriad's hand in marriage to the Prince of Malchior, Hain would hold off the Dread Army with his men to give Myriad a chance to find a weapon capable of defeating the undead. Buxtehude accepted.[3]

After many obstacles, Myriad found the Apple of Life. The Ixshasans had anticipated her move, however, and did not leave the apple unguarded. The undead form of her lover, Dundareel, waited at the Tree, tempting her to abandon Holden and use the apple on him instead.[3]

Myriad took Dundareel hostage and returned to Holden in time to find the Dread Army storming the castle. Rather than raise Dundareel, Myriad raised the Ixhasan army from the dead, creating an army of confused, purposeless mortals. After driving them from Holden most of the army starved to death in Ixhasan lands due to lack of food and rejoined the undead army. However, Myriad's action gave King Hammerdoom of Malchior the time he needed to seize the God Head Seat.[4]

After her marriage to Prince Rannon of Malchior the beloved Holden hero disappeared.[4]

Buxtehude is the name of a town in northern Germany and is little known in middle and southern Germany. Because of that, the name of the town is often used in an german expression, which translates to "to go to Buxtehude" and can be compared with the English expression "to go to the back of beyond".[5]