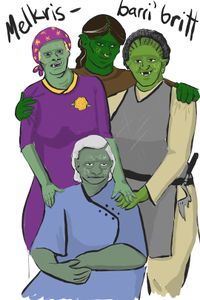 Call them "Little Women." I dare you.

A matriarchal society that arose from the ashes of an intra-clan war.

This clan was created from the remains of four houses after the Four Tribes War, in which most of the male warriors from each house died. This matriarchal tribe still has four houses, now joined and specialized. House Faia is known for its knowledge and expertise. House Tav are master craftspeople and traders. House Roshanara handles diplomatic affairs that are not martial or commercial. The Amber Scythes are hunters, farmers, and gatherers.

While orcmaids may become matriarchs of their house in Melkris-barri'britt, orc males are forbidden from procreating unless adopted into a second house. If an orc male chooses a life of celibacy, he can gain high social standing, though not as high as a matriarch.

Other clans have differing opinions on the Melkris-barri'britt, sometimes sexist, sometimes warily optimistic.