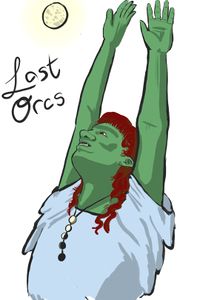 Honestly, Yelling at the Moon is one of my hobbies too.

A clan that passed from history into legend, but that is still very much alive, and waiting to be taken home.

During the Red Exodus, this group was separated from the rest of the refugees and traveled north until they could find a defensible position to winter. After they settled, some returned to see the aftermath, and found a graveyard of dead orcs (from one of the few dwarven-human victories of the Red Exodus). Assuming all others were dead, this clan declared themselves the last orcs and retreated into their valley.

Many now believe their ancestors came from the moon, and that one day, the moon would beckon them home to live in paradise again. The moon is the center of the theocracy, and many feasts and celebrations are held in her honor throughout the year.

Last Orcs that venture out often find other orcs. Some are killed, others latch to the tribe that found them, but none lead outsiders to the valley.

Note: The Last Orcs are also referred to as the Lost Orcs in OED2.