Difference between revisions of "Imperial Wolves" 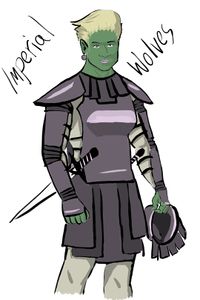 She comes from a long line of shock troopers and she will wear pink if she pleases.

Former shock troopers of the Underkings who've dedicated themselves to defending all of orcdom.

Originally bred by the dwarves to serve as enforcers, they were routinely used to quell rebellions prior to the Red Exodus. During the Red Exodus, they rejected their masters, killed them, and joined their orcish brethren.

The Imperial Wolves are semi-nomadic, and value intelligence and education. Their council selects their Chief, but once selected, the Chief's power is absolute.

The Imperial Wolves will always answer the call of Orcish clans in distress.