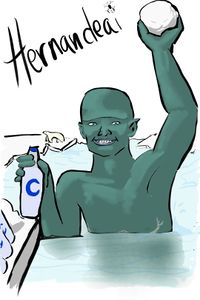 A blue-skinned clan known for its Ordic blood and powerful drinks.

After the Red Exodus, a small group of cave-in survivors come across a group of what they assume to be fellow orcs, though blue-skinned. The Ularin orcs and the Dark Winter "orcs" join and survive together, eventually emigrating south to avoid light starvation during the extremely harsh winters. Marrying and interbreeding led to the grandson of the two chiefs, Hernandeai.

Via acclimation or Ordic blood, the Hernandeai are particularly good at withstanding low temperatures, which is apparent in their tolerance of their famous alcohol, blue moon brew. This alcohol causes a severe brain freeze, and orcs that don't pass out are likely Hernandeai.