Difference between revisions of "General Hain" 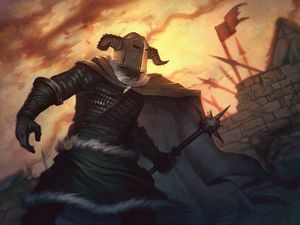 General Hain is a military commander of the Protectorate of Malchior.

Quite possibly the best strategic commander in Countermay today, Hain has served the Protectorate of Malchior for over 30 years.

Hain gained command of the armies of Malchior during the campaign against the God-King Shad-Hujem by supporting an alliance with Simm Buxtehude and Tuatha Dundareel. At the time the Hujem had nearly overrun its neighbor, Malchior. Many of the older commanding generals refused to switch tactics during the war, believing alliances were a sign of weakness.

Hain was the only general to speak out in favor of an alliance to the young King Hammerdoom, arguing that stubbornness and honor were not the same thing. Malchior was instrumental in defeating the Cult of Shad-Hujem.

Over thirty years later Hain again showed himself to be not only a powerful warrior but an able diplomat by forging an alliance between Malchior and Holden to prevent the Ixhasa from seizing the God-Head Seat. In return for aiding Holden King Hammerdoom gained possession of the seat, granting great power to his armies.