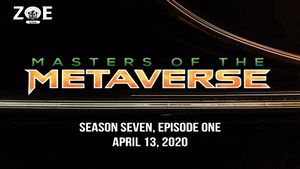 Crash, Andi, Rosie, and Jenika return to Sentinel City and their former avatars. Five years have passed and it's Butch and Abbi's anniversary...

The pilots return to Sentinel City, and to their former avatars. Butch and Abbi have taken in the many orphans left behind by the war with Kronos and have opened a school. Hex, Bombshell, and Lady Veil are all on staff and working to help the young minds of Sentinel City have a bright future. But not tonight. Tonight is Butch and Abbi's 5th Wedding Anniversary and he wants to surprise her. While Johnny, Hex's multifaceted boyfriend, takes Abbi out to buy a dress, the others set to work planning a party. Since Abbi has already figured out that there is a surprise party on the way, it's fun being an empath, Butch decides that the best course of action is to plan the worst party ever and then surprise her with the best party ever. The group gets to work setting up the event, complete with singing possums, naked clown strippers, and the color pink. Abbi meanwhile selects her gifts for Butch as well as her new dress. The party gets underway and Abbi is definitely...surprised. Finally, Hex shoos everyone else out and sets up a private moment for both Butch and Abbi. They finally get a moment to breathe, talk, and exchange gifts. And the Butch's phone rings. It's Armor Guy. Apparently a group of Butch and Abbi's adopted kids have broken into his lab and set off a load of spider bots. Upon arriving at the scene it becomes clear that the kids are terrified. It doesn't get any better when Bombshell turns many tiny spider bots into one giant one. Abbi goes full Titan and emulates her husband by punching it in the head. Hex makes the spider insult Titan and Bombshell's ensuing rage manages to get it shut down for good. There is some serious parental discussion happening when Hex tries to help with some advice. Butch snaps at her and Hex leaves, feelings hurt. Butch and Abbi take a moment to calm themselves and Abbi urges him to apologize to Hex. He does and the group meets at Joe's Diner. They are enjoying their milkshakes when a strange woman enters. It's Monday and she has a dire warning for them. All the stories are ending. All of them. And no one knows why or how.