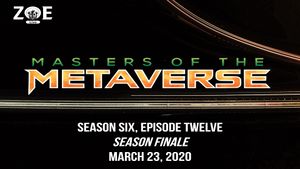 The final confrontation with 742 is at hand. Who will fall and who will be the Masters Of The Metaverse?

As the defense grid on Luna falls, Patric lands the ship in a hangar close to Eli's signal. Thomas suddenly vanishes in a puff of green motes. TOM is unable to locate him and states that he is no longer in "this Metaverse". And that he was not returned because of a technological device. Patric, Mac, and John make their way towards the middle of the hangar...just in time to find themselves between two sets of power suited guards. John pulls off wall panels while Patric blows up walk ways. The guards open fire and destroy Patric's drone. They also inflict some serious damage on John Stone. John returns the favor with a giant metal wall panel frisbee. Patric uses the corpse of his drone to electrocute a group of guards as more open fire. John launches himself like a missile and takes out several guards while TOM jams their communications. Patric creates a grenade choo choo train and makes a run for it, picking up his drone on the way. Mac rigs up a floating gun and also pushes for ground. John leaps down to join them and they all head for the exit. John suddenly gets knocked off the walkway while Mac and Patric hurry on as security doors begin to slam shut. They end up in a science lab and Patric is shot by an electrical weapon. A man in a jumpsuit emerges from cover, Captain Donaldson, and prepares to kill Mac. Meanwhile, John Stone rises from the floor and faces his attacker. A large metal man with glowing red eyes...its Eli. He's being used as AI for the metal suit and John isn't ready to let him go without a fight. It becomes clear that Eli isn't even in there and John rips off a panel and starts whacking. When that doesn't seem to do much, John uses his static charge to stun his brother. As Patric repairs his system from being stunned, Mac attempts to not die by trying to hide in the robots. Patric sneaks up behind Donaldson and throws two grenades, one to entangle and one to engulf in flames. The enemy pilot is very damaged but not yet dead. Mac makes a beeline to a gatling gun on a backpack and engages the plasma weapon. This finally kills him. John Stone is able to stun his brother for a moment and TOM offers a possible solution. He beams himself out of John and then Eli's voice comes into his ears. TOM has given his place to John's brother, taking up residence in the enemy metal suit...which the AI doesn't like. The suit is set to explode and John and his brother make a run for it. He meets up with Patric and Mac, and they reach Pierce just in time to watch the entire station blow up. Entering space, Quaid comes over the comms and the team watches as the enemy capital ships all explode into nothing.

Crash, Andi. and Bruno emerge from their pods only to find Patric, Mac, and John are gone. Monty fills them in on what's been going on while they've been away. Suddenly Zenda appears and transports them all to Arena. One of the pilots from 742, a man calling himself Jaxun Trinity, demands a right to Prime and to being Masters Of The Metaverse. They also are holding Thomas Wells captive. Crash speaks for his group and asks the pilots to step up and stand against the 742 pilots. He also chooses trial by combat for dominion of Prime. Andi heads to the jungle with her opponent, while Crash and Bruno head to the tundra and rocky desolation with theirs. Andi uses her super hearing from Abbi to locate her opponent in the jungle and flies directly at her, sinister knife out. Crash, meanwhile, sits down in the middle of the snow and waits. Bruno triangulates the likely position of his opponent and holds. Andi and her opponent spot each other at the same moment. Andi finds herself encased in ice and then burst out of ice as Theresa Jaxun attacks. Andi takes a hard hit and swings with her blade, the demon blade shattering in her hand. Crash reveals to Jaxun that he has been giving dreams to Patric, telling him that he could destroy the moon in 742 if he wanted. Jaxun Trinity attempts to disintegrate Crash but fails. Crash responds by punching him. The two trade blows but Crash seems unphased. Bruno tries to shoot his opponent and gets hit by a shockwave for his trouble. Andi uses ultra vision to stop Theresa's regeneration. Jaxun Trinity attempts to use his sorcery to smash Crash...and fails. Crash punches him in the face. A platinum loot box suddenly drops in front of Bruno. Opening the box, he pulls out elemental control arm bands. As Thaddeus tries to use force fields to damage him, Bruno also punches him in the face. Andi finds herself frozen in ice yet again as Theresa hits her repeatedly. Andi opens her loot box and pulls out chains of hell fire. Crash uses his loot box to hit Jaxun. Bruno channels Lothar and uses his magic to boil Thaddeus from the inside out. Andi channels all of her emotions and empathy into Theresa and breaks her mind. Crash knocks Jaxun into a dark doorway...into Nyx. The pilots return to Arena and to Zenda. 742 is ordered to vacate the Metaverse and Crash claims ownership of anything left behind. Crash then remembers that he has left his Dad locked up somewhere...for safe keeping. He was afraid his father would try to help thanks to his future sight. His father is cursed, no matter what good he tries to do it ends poorly for him. But he and Bruno can figure out where to go from here, at least when it comes to the weapons and tech left behind. The pilots decide to take a rest and head for a Joe's.