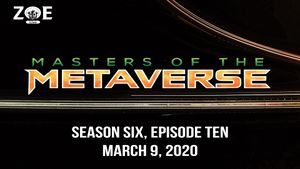 Patric, Mac, John Stone, and Thomas decide to take matters into their own hands. They head to the heart of the invasion...Metaverse 742.

Thomas, Patric, Mac, and John Stone have been basically killing time in the underwater base while the others are using the pods. Patric is starting to lose it a bit. John Stone is searching the Metaverse for Eli when the voice in his head, the one who calls himself TOM, tells him that he has found a signal that matches Eli...coming from Metaverse 742. Thomas is learning to love himself and Patric is...bored. John asks Pierce about 742 and Patric seizes on the idea, suggesting that they go to the source of their trouble. Pierce tells them what an absolutely terrible idea that is but no one seems interested in reason. The group loads into The Reliant and heads out. Pierce manages to break through the defense grid but then has to go into a crash landing as the ship is pretty much broken. When the pilots come to they are being held in a strange prison, obviously captured by the Martians of 742. Patric frees Mac while Thomas frees John Stone. The door opens and one of their captors appears, several unconscious men behind him. He works for the democratic side of Mars, not the invading Trinity from 742. He tells them about ships built to terraform pilots, ships launched to link with comets and increase speeds. Metapilots are a recent discovery on 742, and the moon and Earth are heavily defended. The resistance needs help in getting the defense grid down so that they can then, basically, use one moon to blow up another moon to blow up a planet. Their new ally, Quaid, lets them know to avoid the local flora and fauna. He also mentions that Mac has the genetic markers and is pretty much a meta pilot, much to Patric's chagrin. Pierce stays behind to fix the ship, so everyone can get back, and the rest of them head off. Thomas prestos up a ship and Patric attempts to figure out how to fly it. Thomas deactivates the remote detonation, so no one can blow them up without their consent. Patric takes off and soon closes in on the defenses around Mars and Earth. A transmission comes over and the ship is pulled into a larger station base. TOM comes over John's brainwave and mentions two possible options for destroying the grid. Both are dangerous and both are risky. One is basically a suicide mission and one is definitely a suicide mission. He also lets him know that Eli was last located on the moon of this Metaverse. Oh, and there is a silent alarm going off. Thomas routes the signal somewhere else and the rest of the group brainstorms. Two guards catch up to them and open fire, striking John Stone. Patric sets off a flash bang while Mac activates the fire suppression system. Thomas does a comprehensive scan of the auto detonation system. John Stone tries to intimidate the guards into talking but they don't seem impressed. So John shoots him. The hallway is now clear and the group heads off. John Stone senses that more guards are heading their way very soon but Thomas manages to use the alarm system to send them on a wild goose chase. John Stone notices that the metal of the ship is the same metal that his body is now made out of. The group has time to prepare an ambush for the oncoming guards. Thomas sets of a grenade in the middle of the group while John Stone curls a giant metal wall panel at them. Mac cuts a man in half with a door and Patric shoots one. The group continues on and soon comes upon more guards, this time with a barricade. John Stone rips off another wall panel while Patric finds a little drone that shoots things. Between body slams, explosions, and other violence, the guards are dealt with. Entering the command center, the group spots the commander, who looks similar to Crash or Andi, and a group of mini-Zenda aka scientists. Thomas blows the commander's head off which leads to the detonation of the other guards on deck. Leaving only the scientists, Patric directs them to use the defense system to fire on the approaching ships. They then make a run for the ship and climb inside as the debris from the exploded ships are pulled in toward the space station. The defense grid has been taken down but they are being pursued by four spacecrafts. John throws a bomb at one and Thomas takes over another. Patric broadcasts the the other ships have been compromised by metapilots which leads them to blow up. Patric crash lands on Mars and the pursing ships break off their pursuit. John Stone stands up now revealed to be made entirely of metal. Mac and Patric let Quaid know that the defense grid is down and the second stage of the plan gets under way. Next step...stealing a transport ship.