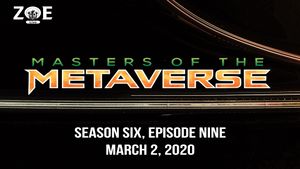 In a world of super spies and villains, Crash, Andi, and Bruno face off against 742 in the most up close confrontation yet.

The year is 1963 and just hours ago, the villain Baron Mind captured the secret agent Jane Blonde. Down in the cells, the trio of erstwhile "heroes" try to break free. They manage to do so but soon find themselves in a room of mirrors. Crash via the Baron crawls across the floor and triggers a few lasers but is mostly fine. Crash manages to create a mirror shield so the others can join him on the opposite side of the room. Crossing to the next room, Bruno blows the door off the hinges and proceeds to fall into the shark room. Bruno climbs out and the others try to devise a plan to get across. Crash basically jumps the shark while Andi rides one. She also starts using her shoe guns. Bruno then tries to sprint, jump, swim across. Bruno and Crash make it across while Andi is dealing with the feeding frenzy she started by shooting sharks. She makes it and they enter the third room. This is the ninja room. Bruno walks in and the lights go on, smoke bombs drop, and the ninjas enter. Bruno takes out two with one staff while Crash uses his robotic arm to murder and intimidate them. Andi tries to seduce them. Bruno kills two more ninjas while Crash punches the rest of them to death. Down the hall they find...another door. Bruno kicks in the door and finds the pool of acid. He jumps across and lands in front of the next steel door. This room is full of snakes. Crash grabs a pendulum, planning to use it as a pole vault. However, the snakes are on drugs and have been killing ninjas. Bruno makes a run for it and gets bit for his trouble. Crash uses his blade as a rake and pushes his way through the snakes. Crash tosses Andi over the snakes and Bruno kisses Andi...thanks to his avatar. Bruno retreats into his avatar and the group enters a maze of death. The maze is also full of people who want to kill Andi's avatar. The pilots engage in combat with the denizens of the maze. Crash blows up one, Bruno strong arms another, and Andi cuts someone's throat. Crash chokes out the last one and crushes his skeleton to death. They finally reach the elevator...which is also a death trap. The fake elevator slides away and the real elevator is revealed. Going up, they encounter a group of guards who are very surprised to see them alive. Crash tries to fire them but not everyone listens. The ones who don't get the claw aka instant death. Andi steps up and attempts to convince them to join the Royal Navy instead. Some decide to consider this while Bruno handles the ones who don't. Everyone surrenders and Bruno collects the guns. They finally make it to the armory and the "arm"-ory. Crash realizes that the invaders likely are trying to take this base for their own operations and the group decides to head to the lab upstairs. They need to get across the barracks first. Thanks to some grenades, guns, and lightening blasts they manage to clear the room. Entering into the science area, they find that the scientists within are all being piloted, a grand total of four. One of the enemy pilots gets the jump on them and attacks Bruno. Bruno takes control as his avatar begins to die. Crash turns all the poison in the room into water and then judges the pilot nearby. Bruno feels his healing power kick back in as he beats a guy with another guy. Andi then uses her abilities to kick three pilots out of their avatars. The remaining pilot produces a button and pushes it. It launches a nuclear missile but he springs a death trap...on himself. The avatar falls into seizures and combat is over. No pilot from 742 remains. Two days later, Jane is taking the Baron to jail. Along the way they stumble upon a brand new Joe's Diner. Once inside Crash tells Andi that he is going to take her back to someone who misses her, back to Abbi. Back home.