Episode Ninety-Four: ...You Die By The Sword 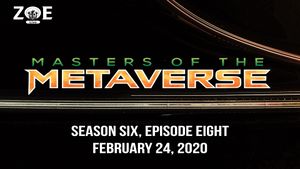 Jenika, Andi, and Bruno confront the invaders and uncover some disturbing truths about the planet...and a familiar face appears.

In the aftermath of the cave, Brony's avatar is poisoned and dies. Luckily, Brony is able to safely jack out. As the rest of the team makes their way out, they soon come across a world of burning ash and the remains of steel buildings and paved roads. The ruins of the city are massive and it's unclear what destroyed it in the first place. They keep heading north and Bruno notices that it appears that the damage was done by one massive explosion and they are currently walking the edge of it. Continuing on, night begins to fall. They stumble upon groups of picked clean Oggri bones...just in time for Bruno to get grabbed by some taloned feet. He stabs at them and is dropped. Andi begins stabbing with her knife while Bruno takes down one of the attackers with his bow and arrow. Andi gets grabbed but manages to climb up on to the beast's back. It appears to be a giant vulture like bird of some kind. Jenika and Bruno continue to fight against the winged attackers while Andi keeps flying toward the horizon. She manages to cut off a wing and glide down, suffering only minor damage along the way. Regrouping, the pilots press forward in the hope of finding shelter and water. The eventually find themselves at the base of a dark tower surrounded by pre fabricated buildings and a shimmering gate. It's clearly the base of the 742 invaders. They are preparing to launch an orbital station into space and there are dozens upon dozens of armored troops. There are also plenty of tanks and scientists. They decide the sneaky approach might be best, just in time for Andi and Bruno to go more toward their avatar sides. Jenika manages to convince Andi's avatar to be sneaky, or as close to that as she can possibly get, and the group approaches the combat line. The invaders quickly pick up the signal of MetaPilots but they haven't been spotted yet. Andi and Bruno kill two guards and Jenika stabs the third before he can raise the alarm. They sneak away but the next guard patrol spots the corpses and alerts the rest of the compound. The pilots manage to sneak to the entrance of the tower and finds that the invaders had to break into the tower. 742 did not build this tower, they had to force their way in. Our team gets inside the tower and immediately face off against two guards. Jenika removes the head and bowels of one while Bruno stabs the second one down the throat. In the center of the ground floor they find an elevator which they call to them and travel 1000 meters up. The doors open and four more guards appear in front of them. On the walls, alien symbols flicker and flash. Down the hall come the whispers of voices, voices that sound very like Zenda. Andi uses a giant sword and kills two guards while Bruno knee slides into the room and shoots the other two guards with arrows. Jenika finishes them off with her sword leaving no one to warn the two guards in the other room. One guard advances toward Bruno with a lance while the other drops a grenade among the scientists. The grenade detonates and kills all seven scientists, all of whom looked like relatives of Zenda. Andi kills the other two guards. Suddenly the voice of TOM comes over the speakers. He congratulates them on their intervention and informs them that his plan to occupy all avatars was in response to this invasion. He tells them that they need to disrupt the O.G.R.I control systems in order to free the Oggri. The Oggri are an artificial race and were created to enslave humanity. They served a different race, someone who has not been present for some time. 742 has taken them over and been using them to hunt down the avatars and people of the world. Jenika overrides the Oggri and gives them the command to go back home. TOM invites the pilots to the control room at the top of the tower. There is a hologram of TOM waiting for them. He welcomes them and assures them that humanity will now recover in this world. He also tells them that the beings who used to live here appear to have been capable of Metaversal travel. TOM used parts of their systems in order to find parts of himself and begin to rebuild. He also tells them that there are many satellites in orbit that have weapons systems. Apparently the last time they were used by a woman named the Azure Phoenix, the destruction was immense. She liberated her people from the Oggri and put them into a feral state...the tale of The Sky Stone. TOM's goal is to destroy the 742 invaders in whatever Metaverse they appear in. He cannot leave the tower but he is willing to help. Stopping the invasion requires Arena. And if Crash brings dispute over the invasion to Arena...he can issue a challenge to the invaders. He tells Andi that she needs to use the weapons in order to destroy the invaders on the planet below. She steps into place and transports Jenika and Brony to safety. She then targets each invader with enough power to kill them. And then she destroys the tower and teleports herself out. TOM wishes her good luck and asks her to stop the invasion.