Episode Ninety-Three: If You Live By The Sword... 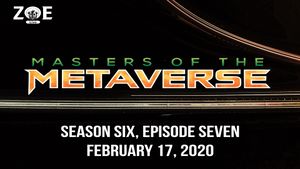 The pilots enter a new world where women rule and men are subjugated. Can they stop not one, but two invasions?

Andi, Jenika, Brony, and Bruno are sent into a world where woman reign and men serve. The alien invaders have just struck and the queen and her warriors have fled to the forest. After much discussion they finally decide to head out in search of the invaders. It is clear that they are flying search patterns, likely looking for avatars or pilots. Sneaking along, they reach a cave just as the world around them goes dark. After some time they hear people approaching the cave. It quickly becomes clear that they have been found by a force of invaders. And they know they are pilots. Brony kills the commander while Andi and Brony take out two more. Brony takes out another and Jenika beheads one with an arrow. Andi destroys the device being used to track them while Jenika convinces them to give up the fight. Before they can question their prisoners, the armor self destructs destroying everything. The group decides to head to a nearby monastery. The building appears to have been raided recently and low voices can be heard inside. The group sneaks forward and inside they find four women tending to the queen's sister, who appears to be dying. Bruno approaches and is pushed back by the guards. He is told by the dying queen to find her sister, to tell her that there is still hope. And to remember the sky stone. Jenika's avatar remembers the tale of the sky stone, a fairy tale of the dawning of the age of woman. The sky stone was a sacred tower to the aubry, the animal-like people who inhabit the forests. But again, this was all just a story. They decide to head into the mountains to a great temple that contains a library which might hold the information they need. By the time they arrive, the temple is under siege by the Aubreans. The pilots decide to shoot off their plasma guns around the encamped beasts in an effort to draw them away from the entrance of the monastery. The plan works well for a time but they are soon spotted and several pursuers take off after them. They reach the steps of the monastery and the defenders begin to fire on their enemies. The doors slide open and the pilots rush in. The library contains many books, including ones that Bruno recognizes. Textbooks and manuals from the 1960s, magazines and books, all in various languages. He also finds a record of the Sky Stone, a great weapon that brings about the Great Winter. The pilots analyze the story and determine that the Sky Stone is most likely a found piece of technology, possibly not of this world. The walls suddenly cave in as two steel machines blast their way in. The monks hold off the invaders while Bruno seals the library. The pilots duck down the dark passages and the monks close the way behind them. After a few hours they hear noises which Andi identifies as sonar, possibly bats. They come into a cavern full of bones and Brony and Bruno's avatars recall tales of huge and terrible moths...who are always hungry. One such moth appears and nearly takes off Brony's head. Jenika begins firing arrows while Brony and Andi physically attack as much creatures as they can reach. Bruno channels his link to a former avatar and uses elemental magic to bring down the ceiling of the cavern, crushing the host of creatures below.