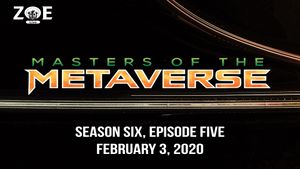 The pilots are joined by Andi Jaymes as they attempt to not only steal a flying machine, but also to jailbreak a bunch of dinosaurs.

The team gains new information about the secret island prison. The prison in only accessed by the invaders, it was in fact built by them. You can only reach it from the air and no one has ever escaped. They need to seek out Jane Utah to see if they can use her flying machine. They head out and find Jane, smoking on a pile of dynamite. It turns out that Jane has actually lost her ship and needs help getting it back. The group, with Andi/Jane in tow, heads off for Saltditch. They easily spot the massive zeppelin at the very center of the city. The rest of the buildings are made from a combination of alien metal alloy and wood. The streets are patrolled by carnitaurs and invaders. A plan is hatched to mash two alien ships together and add in an undercarriage in order for all team members to be able to fly out of Saltditch. They also are going to blow up Jane's ship. Wyatt suddenly realizes that the invaders are not only more technologically advanced than they are but they can also see pilots. As Aqua and Rosie stealth off to start making a new ship, Wyatt sets up in the clocktower and Crash teleports via lightening into the middle of the zeppelin. Obviously it blows up. Crash bashes into the invaders with minimal damage. Andi sling shots explosives into the groups of enemies while Wyatt leaps down to throat punch people. The ships are fused together and Rosie enters the one on the right but is overwhelmed by the number of buttons. She calls out to the others that the ship is ready. Andi teleports to the cockpit while Aqua engages in distraction singing. Rosie summons a swarm of laser gatling crows to wreck havoc among the invaders. The compound now in ruins, the pilots load up into their new ships and take off. They head for the prison. An auto destruct suddenly kicks on and while Andi and Crash manage to subvert it, they have to come in for a crash landing on a nearby island. Crash realizes that the signal was broadcast from above. In the distance they spy a large alien metal dome, the only way in seems to be a hole in the top of the dome. It appears to be a giant hangar and it appears that the prisoners are being held underground. The pilots blow a plate off the side of the dome and trigger an alarm. The group stealths inside just in time for the elevator door to open. Inside is a grotesquely mutated dinosaur which has the aura of a pilot around it. Crash punches the elevator in response. Which takes care of the dinosaur but not so much the armed guards inside the hangar. Crash jumps on top of the dinosaur and Rosie steals a sidearm, which she passes to Wyatt. Andi gets a hold of a gun and teleports to the guard attacking Wyatt, turning him into goo. Aquamarine then seduces the mutant dinosaur. Really. And Crash then shoots him in the head with a rocket launcher. Rosie sneaks a gun to Crash and Andi uses her very effectively. Aquamarine kills a guard and then eats him...well, her avatar does. In the basement below they find glass tubes filled with famous dinosaurs held in suspended animation. From down the hall, Crash hears roars of pain and realizes that someone is being worked on. The rest of the team joins him below and find a scientist who looks like Zenda torturing a dinosaur. Crash persuades him with a gun to open the other tubes and allows the other man to leave. The man is very willing to talk, he believes that knowledge is for everyone, and tells the pilots that he was preparing the dinosaur for forced occupation. He also tells them about his home Metaverse as well as the orbital base above the planet.