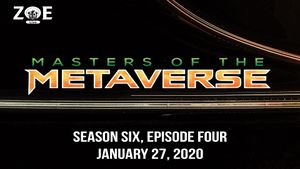 Crash, Rosie, Aquamarine, and Wyatt travel to a world of cowboys and dinosaurs. Once there they will come face to face with the invading enemy that threatens their world.

The pilots are preparing to enter the Metaverse when all the electronics go out. Apparently the entirety of the world has had their internet, cell phones, technology, and electricity cut off in what appears to be a weaponized strike. The pilots leapt into their avatars and are surprised when they are immediately recognized by a talking dinosaur. Apparently he is a liberated pilot from Arena and he is delighted that the "liberators" have arrived to save them all. He asks them to go and intercept a train that is heading out from the mines. The opposing Carnisaurs have apparently sided with the invaders from 742 and have captured members of the resistance. The pilots head off toward the nearest train tracks and eventually find the hidden fort. There is a train parked outside and it's in the process of being loaded. The train starts to depart and the pilots take off after it. They manage to climb onto the fortified caboose. They attempt to climb over it in order to release the car from the rest of the train and unfortunately Arthur isn't as stealthy as he would like to be. Big Al takes out two guards as the others shoot, crush, distract, and basically destroy the others. A few shots ring out and likely alert some other guards further up the train. They now enter the tunnel and it's imperative to get the train diverted now. They release the caboose and begin traveling up the train. Eventually they find themselves running into a dinosaur barricade. Big Al once again takes down three with two shots. Wild Jill manages to convince most of the others to hand over their guns while Big Al attempts to make them rethink their poor life choices...which they happily do. Moving to the next car, the pilots find the prisoners chained inside. Crash uses his abilities from Zeus to free the prisoners while Wild Jill sings them a song of comfort. The pilots travel through more cars filled with supplies until they reach two dozen enemy soldiers and a T Rex with a gatling gun strapped to his chest. Wild Jill engages them in a poker game for the train while Rosie uses Loki magic to shrink everyone's arms. Yes, really. Meanwhile Wyatt utilizes his knowledge from Amon Rah to create a sun powered laser gun but manages to miss. Crash lightening lashes the gatling gun away as well as the rest of the guns. Moving toward the engine, the team is confronted by a half metal half dinosaur engineer. The group manages to take him out very quickly and seize control of the engine. Now they just need to switch the tracks. Big Al shoots the switch and changes the course of the train. Entering the canyon with the mine, the pilots see a flying machine swooping in that fires an energy weapon and destroys the final car of the train. A second shot destroys another train car. This flying spaceship clearly is too advanced for this metaverse and obviously belongs to the invaders. Big Al takes a couple of shots but they don't do much damage. Rosie and Crash team up with Rosie shooting Crash with lightening and Crash punching the ship out of the sky. The train finally reaches its destination with Arthur close behind. The prisoners head for the jungle to hide with plenty of new supplies and weapons. The pilots prepare to leave when they are told about a special jail on an island where the invaders are doing experiments on the dinosaurs.