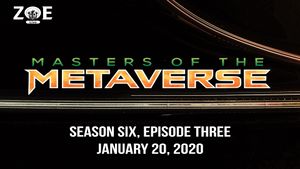 Patric, Bruno, Mac, and John head to the secret Program base. Once there, they uncover new truths about their pasts and their future.

Nick takes a moment to speak with Bruno and then steps into Joe's Diner. Bruno then attempts to wrap his head around all the new information that Patric, Mac, and John have for him. And they have to deal with the same thing for all the information he gives to them. Bruno interrogates one of the wounded avatars and attempts to convince him to bring the pilot out to talk to them. Patric then offers to torture the dying avatar until the pilot comes forward. The pilot finally speaks to them and reveals that he comes from Metaverse 742, the same world that Zenda came from. John Stone looks through the belongings of the avatars and finds matching burner phones, complete with coded messages. All messages are about them and about tracking them down and killing them, all sent from Agent Roberts. They were also told to secure and hold the Joe's Diner. Realizing that the agents will be sending reinforcements, the group prepares to hold off an assault. Reese finally shows up and Mac decides to go into Joe's Diner. Patric and Mac go in first and see nothing out of the ordinary. Bruno looks in and sees the pilots and avatars for what they truly are. Bruno asks Hollywood to pass on the information they've uncovered too Rhodes. Unfortunately, since the new Rhodes is Zenda and the invaders are coming from his homeworld, he isn't allowed to interfere. Though Hollywood doubts that will stop him. Patric lets Bruno know about the message from Jaxun and the secret map to the hidden base. He passes along the audio file to Bruno and they decide to Baja to meet up with a guy Bruno used to work with. As they travel, the phones taken from the pilots beeps with a message asking for a status report. Mac tries to convince them that the Joe's has been taken but reinforcements are still sent. John calls Hollywood and gives him a warning though Hollywood sees no cause for concern. Finally reaching Cabo, the team meets Monty and heads off for the secret base. As they travel, Patric reveals that he's planning to leave once they reach the secret base. He's certain that in all likelihood, he will end up being a potential avatar and he doesn't want to take that risk. Monty finds the entrance to the base and the submarine approaches. The team disembarks and heads into the base. The entire place is abandoned...and then Patric notices the cameras. John tries to hack into the cameras and downloads a virus for his trouble. Tiny Tom manages to block it off and John realizes that the same people who upgraded him are the ones who installed the cameras in the base. The virus also likely came from the same people who helped create TOM and Tiny Tom. John and Mac settle down to hack a vaccine to the computer virus while Patric and Bruno go exploring. They soon run into machine gun fire and enemy soldiers. Bruno shoots and Patric explodes and they quickly clear out the people shooting at them. At the top of the ramp they find a lead lined door that has recently been welded shut. Bruno rips the doors open and finds even more gun fire. When only one person is left, John Stone approaches and asks him what he knows. He reveals that they are all working for "the Doc" who is in the barricaded room behind them. Patric and Mac blow the door and Bruno crowbars it the rest of the way open. The opening reveals a computer lab that looks very familiar to John. The scientist inside recognizes John and Bruno. It's Dr. Simon Lane, someone that Jaxun had claimed was dead and someone that used to work with Nick, Bruno, Jaxun, and Jeb. And someone who helped create John Stone, Henrich, and many other things..including a way for non pilots to experience the Metaverse. He just needs some test subjects. Patric volunteers just as an alarm goes off. Metaversal travel is happening in "The Chamber"...a place of power. Dr. Lane leads the group in and they find a spaceship. A frazzled looking Pierce emerges, bringing with him Crash, Rosie, Aquamarine, and Wyatt.