Episode Eighty-Eight: Visions Of The Future 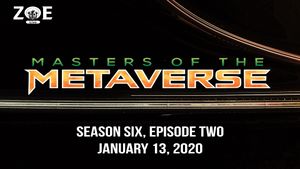 John Stone is brought back online and the team goes on the run. In Nevada they uncover a hidden message, and a new threat is revealed.

Nick is still a rabbit and John Stone is still locked in a box. Making their escape in Reese, the team manages to pry open the high tech pod encasing John and wake him up from his stasis sleep. Unfortunately they knock the power out for the surrounding neighborhood in the process. John gets filled in on what he's missed and Nick finally gets a new body in the form of an Uber driver. John also reveals the Tiny Tom inside his head, although this voice is adamant that he is completely different than the entity known as TOM. Patric also notices that John Stone has been changed, specifically he is no longer a physical man. The only part of him that is a living person is his brain. The rest of his body has been removed and replaced by alien tech by the pilots from the other world. The group decides to head for Nevada, and not ditch Reese in the process, in the hope of figuring out what the key found in Jaxun's office is tied to. It isn't long before they run into a police road block. Using Reese's holographic capabilities, they disguise themselves as a family of four. It seems like they've gotten away with it until Nick notices that there is a metapilot behind them in a car, watching the people pass through the roadblock. Nick finds out that the pilot is following them and it soon becomes clear he isn't the only one. There are about six unmarked police cars following Reese. The team figures out that the box John Stone came in is carrying a tracker. Reese and Patric create a diversion and they manage to give their pursuers the slip, at least for the moment. Going off road, the group has a chance to assess their options and eventually decide to split up with Reese and meet him again in Nevada. The group heads to a nearby airfield while Reese draws the fire of the mysterious pursuers, managing to survive thanks to the Metaverse intervening. The plane is almost over the Rockies when the drones swoop in. Satellites have been used to track them down and give their position away. Making an emergency landing, Nick uses his skills to commandeer a trucker and his truck and the group finally makes it to Wells, Nevada and the bank where Jaxun's deposit box is located. Patric and Mac enter the bank and retrieve the contents of the box, a single flash drive. There are two files on the drive. The first is a map leading to a secret Program base in the Sea of Cortez. The second is an audio file from Jaxun to his son, Crash. He reveals that his worst fears have come true...their Metaverse is under invasion.