Episode Eighty-Seven: Ghosts Of The Past 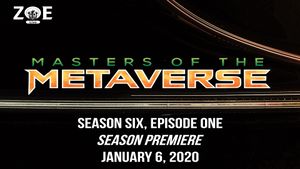 Patric and Mac are on the run. A few days ago the president of the United States issued an order for their arrest. Lizzie Foster, Wendy, John Stone, everyone from Planet Metaverse is gone, orders to terminate on sight, and they're coming for Patric next. With no one left to turn to, Patric reaches out to Nick Krieger. As Nick races to their hotel, Mac and Patric sneak out under cover of explosions. The three take off with the local police force in hot pursuit. Nick commandeers several people while Patric and Mac take out the others. Finally free from their pursuers, the group heads to a former Program safe house that Nick knows about. On the way they switch vehicles...only to find their next ride is a sentient transforming robot that looks like a stagecoach. His name is Reese and he loves to drink. The safe house is abandoned with most of the security systems taken offline about nine months ago.. Mac and Patric do some research and uncover some information regarding an unknown sub level two in the Planet Metaverse facility. Deciding that the next step in the mystery of what is actually going on is in that basement, the team heads off to the facility. It's currently under the control of Agent Roberts, someone that Nick saw recently...with the halo of a pilot around him. As they travel the group comes to a terrible realization...that a team of MetaPilots has taken over not only Agent Roberts but also the president of the United States. An invasion has begun and no one knows about it. Through means of body swapping, chloroform, and streaking the three enter the Project Metaverse facility. They find Jaxun's office and Patric discovers a key to a safety deposit box behind a photograph of Jaxun's family. Moving further along they find a group of technicians building strange devices, under the supervision of yet another piloted individual. The device looks like a giant circle or, as Patric calls it, "a Stargate". A firefight breaks out and while Patric and Mac fend off their attackers, Nick leaps into the mind of John Stone. Once inside Nick discovers that John stone is only 15% grey matter with the rest being tech. He also discovers that John is not alone in his mind, an AI calling itself TOM is there too. Nick gives John hope and lets him know the plan while Patric blows a hole in the side of the building. Extricating John Stone, Nick blows up an elevator of guards and ends up leaping into the mind of Mac. Escaping the building, Nick jumps into a rabbit and the team makes their escape. Suddenly a voice speaks up, "Can you please let him out? John Stone doesn't like being in this box."