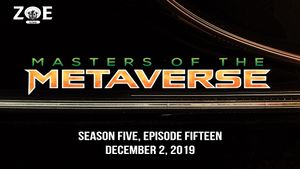 The pilots enter the final stages of Zenda's plan and reunite with an old friend. But things are not as simple as they seem...

Zenda greets the pilots with news. He thinks he has discovered who has been spreading hope among the inhabitants of the city. He believes it is the same person who sent them all their mysterious letters. But Lady Gwen will want answers so he decides to offer himself as a scapegoat. The final stages of his plan are beginning to fall into place and it's time for Crash to get ready for his last few fights before the big one. Namely, defeating The Tempest as Antonius decreed. So while the others head to the tournament grounds, Andi goes in search of Brony. This newly ripped version of her friend has some secrets to uncover and Zenda wants to know if he can be trusted. While Crash gets his costumes and lighting fixed for the fight, Andi breaks into Brony's luxury accommodations. She finds her friend basically the same...except that he has a voice in his head that he talks to and is bonded to a Thraxian prince. The security alarms begin to sound and Brony throws Andi out of the window in the most loving way possible. Andi lands safely but is quickly pursued by armed guards. Back in the arena, Crash discovers that his opponent is a fan of electricity based attacks. So clearly that doesn't end well for the other guy. His pilot beaten to a pebble, The Tempest's owner attempts to kill Wyatt. Which also doesn't go very well. Wyatt relays Zenda's "betrayal" to Lady Gwen, who seems to accept it. She leaves to report in and the pilots head back to the bunker. Andi is still on the run when suddenly she's literally pulled into the bunker by Zenda. Some puking and pulsing metal later, he reveals that he "moved" her, something he didn't know he could do. Andi relays her information and Rosie is extremely disturbed about Brony's bonded avatar. For the first time, she thinks Crash might not be able to beat him. When Andi tells them about Brony's mental companion, they eventually figure out that it must be none other than Artos Caid, a pilot who wants revenge on Antonius, and he was able to use Brony like an avatar. The newly cleared out penthouse, former home of The Tempest's owner, is now ready for Wyatt and his entourage to move into. Crash gets ready for the semi finals when there is a knock on the door. Brony comes in and gets a tackle hug. He tells Crash that he needs him to play dead if it comes down to the two of them. He doesn't want to actually kill his friend. Crash asks Brony about Artos and warns him that Artos is bent on revenge and he doesn't have all the information. He promises Brony that he won't let anything bad happen to him. Ever. The fights commence and it is as terrible and bloody as expected. Crash and Brony are two of the final four. When one of the other two victors "unexpectedly" is injured and cannot compete, it opens up the chance for Antonius to change the rules...and pick his own players.