Episode Eighty-Three: The Rise Of A Warrior 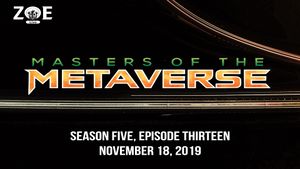 The pilots take on an underling of Antonius with unexpected results. Secrets are revealed and Crash vies for a spot in the Grand Tournament. Deep in the city, a revolution is taking hold..

Andi Jaymes returns in time to find that not only has Rosie done magic in Arena, possibly starting a revolution at the risk of her friends, but that Maddox has disappeared in the night. The pilots don't have too long to digest this information before they are informed that they are being sent out on a raid. A reprisal must be made against the person who tried to kidnap Crash, a slight that Mr. Galli would not stand. Andi and Crash will sneak into the compound and rescue any pilots they find there. Rosie, Wyatt, and Zenda a la Kershaw will strike the front of the compound in an attempt to make as large a distraction as possible. Crash questions whether Rosie as to whether or not she will be able to contain her Loki-ness. When she tells him she might not, he refuses to go claiming he cannot trust her any more. Rosie is hurt but they manage to reach an agreement but it is clear that Arena is starting to take a toll on everyone. Andi and Crash disguise themselves as guards and enter the compound. In the basement they find three adults and two children, all unbonded class three pilots...all terribly mistreated. With the phrase "Hex is hope", Andi gets them to trust her enough to follow them out. Rosie, Wyatt, and Kershaw assault the front of the house leaving destruction in their wake. Wyatt lets one man go to tell the tale of what happens to those who oppose Mr. Galli. Zenda takes back control and directs everyone to the vehicles. Quickly dispatching their pursers, the team heads out into the wastes where they are met by a contact of Zenda's. Pierce, as the man is called, isn't a fan and warns the pilots that Zenda is going to get them all killed. He also is revealed to be a class five MetaPilots. He notes that the pilots are from Prime as well. Pierce takes the rescued pilots and disappears in his spaceship, the only vessel Zenda is aware of that can travel the Metaverse. Back in the bunker the pilots have a strange conversation, during the course of which Zenda's first avatar is brought forward. The next morning Crash and the others return to the tournament grounds. Crash notices something odd. The pilots seem to be filled with hope and determination. More than that, they are telling stories, stories about Butch, Hex, and others. Stories that Crash recognizes as true. The fights begin and Crash easily defeats everyone sent against him. Things seem to be going well until Lady Gwen appears next to Wyatt. She brings him to Antonius directly. It seems that Antonius knows many things. He knows Wyatt's name, that he is a pilot, and that Zenda is involved. He knows about the hidden bunker. But there are some things he doesn't know. Like who is spreading hope in his city. And that's the job he gives to Wyatt.